Rhodes to Symi Day Trip – Everything You Need to Know!

Booking a day trip from Rhodes to Symi should be high on your to-do list when visiting the Greek Islands. It’s an easy 1hr boat trip from the largest of the Dodecanese Islands, and offers an entirely different experience.

With its picturesque harbour, ashen hills, and breathtaking bays, the Greek island of Symi is a place of folklore, tradition, and authentic experiences. Unscarred by mass development, and lovingly restored, it’s the ideal island to experience a different side of Greece, away from the crowds.

Located near the popular holiday island of Rhodes, and with ferry connections to Kos, and Bodrum (Turkey), it’s a popular place for a day trip. But there are plenty of discreet hotels and B&Bs too should you get seduced into staying longer…

Choosing a Boat Trip to Symi from Rhodes

There are several options available when you’re looking at taking a day trip to Symi from Rhodes. Most organzied tours are a full-day excursion, departing in the morning around 9am and returning around 6pm in the evening. And they generally include a stop at the Panormitis Monastery on the way.

As I was travelling in Rhodes with my 8-year-old son, I decided instead to book a high-speed boat cruise to Symi that included a swim at St George Bay, rather than a 1 hour stop at the Monastery.

This trip normally departs Rhodes at 11am and returns at 5pm. But in the high season, they sometimes run two tours a day – one starting at 9am and returning at 3pm, and the other departing at 3.15pm and returning at 8.30pm. However, the latter option doesn’t include a swim at St Georges Bay.

Alternatively, you can go the DIY route and book an independent ferry instead. However, for us, this would have meant longer transit times, and worked out roughly the same cost as booking a tour.

We had originally booked an 11am tour from Rhodes, and as we were staying 45mins drive from the city, I thought this would afford us plenty of time to make our way to the meeting point at 10.30. Unfortunately, our original travel date was cancelled due to high winds, so we rebooked for the next day. Because many people ended up in the same position, they scheduled two tours and gave us the option to choose the earlier or later tour.

My son was super excited about the swimming at St Georges Bay (as was I), so we chose the earlier boat. This meant an early start from our accommodation in Charaki, but meant we had more free time to explore more of Rhodes’ beaches after returning from the tour at 3pm.

The guys at Rhodes Sea Lines helpfully pointed out where the free parking is near the port, so we plugged that into our GPS and set off into Rhodes city. There wasn’t a huge amount of traffic at 8am on a Thursday morning, so it was easy to navigate around the streets.

We arrived at the designated meeting point (easy to spot as all the tour companies have mini stands in front of their boats) right at 8.30am and it was already busy. But everything went smoothly, and we were on board (after a mandatory temperature check) 5 minutes later.

We managed to nab the last two seats upstairs, as I’d read the views were better. But in hindsight, you get a pretty good view from the lower level too, especially if you sit near the front (although be aware that there is no sunshade at the front). We set sail right on time at 9am.

The ride over was a little bumpier than I expected and very windy. But on a hot summer’s day, it wasn’t unpleasant. And the occasional big wave just added to the excitement!

The trip lasted around an hour, before we slowed to dock at the port in Symi.

Other Options for a Day Trip to Symi

If you want a more leisurely trip to Symi, there are other boat options that take between 1.5-2hrs to arrive in Symi, and they typically include a stop at the Panormitis Monastery, and sometimes St Georges Bay. I’ve included a few options below.

Best Things to Do in Symi

We had three hours to explore Symi town after arriving at 10am. This may not seem like a lot, but the town is small, and you can cover a lot in that time. Here are a few ideas to get you started:

After walking down the port, towards the centre of Yialos, my son spotted a bright yellow and red tourist train, so we grabbed tickets for the next departure in 15mins time.

Trips take 45 mins and cost €8 for an adult and €4 for a child. They wind back through the port and around to the west of the town, stopping at a lookout point over Emporios, and the uninhabited island of Nimos. They run on the hour from 10am – 3pm, and then again from 6.30pm – 9.30pm.

The trip would have been fairly unimpressive, bar the beautiful views, if it weren’t for the hilarious driver! He entertained us all with his quirky choice of music blaring from the carriage speakers, his questionable dance moves, and his quintessential Greek-ness (yes, it’s a thing).

Once we stopped at the lookout point, he offered to take photos for anyone who wanted them, before heading back down to the port, clapping and cheering in time to the music.

The residents of Symi have been diving for sponges since the 19th century. At first, by holding a heavy rock to sink to the ocean floor, and more recently using more modern methods! At one point, it was the main economic activity in Symi, and the island was home to the worlds largest sponge diving fleet.

These days, it’s mainly fishermen who moonlight as sponge divers, and the number of sponges to be harvested is rapidly decreasing due to climate change and rising sea temperatures.

There are shops all along the port selling these sponges which range in size & quality. They’re a fabulous souvenir to take home with you and an eco-friendly way to wash your face, body, or even your car. Just make sure you chat with the vendors to find the right type of sponge for your intended purpose.

The harbour town you arrive at in Symi is called Yialos, and it’s one of the most strikingly beautiful places to visit in Greece. Surrounded on all sides by terraces of neo-classical buildings, these colourful mansions speak of the aforementioned sponge diving heyday.

Beautifully restored, and protected by the local government, these unique houses really make Symi stand out from the other, less protected islands. New buildings here must be built to blend in with the existing style, and no unsightly hotels can be constructed.

Take a walk along the waterfront and admire the contrast of impressive superyachts parked alongside traditional fishing boats. Afterwards, make your way into the myraid of streets that weave through the old town, taking in the charming details at every turn.

There are plenty of shops to pull your attention – catering to both the locals and tourists. And you’ll find the best boutiques away from the waterfront.

Even with only 3 hours to spare in Symi, you’ve still got time for a quick dip at one of the island’s beaches. Take a stroll along the west of the harbour, past the port of Charani, and after about ten minutes you’ll reach Paradise Beach.

It’s not the most beautiful beach on the island, but a convenient place for a swim and to enjoy lunch with a seaside view. There are also sunbeds for hire and water toys to rent.

If you’re up for more of a walk, and want to find solitude, keep going past Paradise Beach, up the hill and around the bend. You’ll see the gorgeous cove that is Sarah Beach below you, and you can reach it via stone stairs etched into the cliff.

Walk the Kali Strata to the Old Village (Chorio)

Built by wealthy Symi residents in the 19th Century. The pathway of Kali Strata was originally the main link between the harbour of Yialos, and Chorio, the older part of Symi that was built on the hill.

The stairway leads you between the maze of houses and stores that cluster at the bottom of the hill, and weaves a path up through the colourful terraces. There are glimpses of the harbour and island as you go, but the most sought-after view is at the top of the 500-odd stairs.

Reward yourself with a cool drink at one of the conveniently located bars at the top, before taking the time to take in the sights of Chorio. If you can climb a little further, you’ll reach a little whitewashed church (Church of Panagia), and the castle ruins of Knights of St. John.

Have Lunch in a Seaside Taverna

The harbour is dotted with adorable places to eat and drink. Ranging from humble local haunts, to more high-end establishments. We weren’t overly hungry, so stopped at a cosy looking cafe for a freshly made crepe and a refreshing Mythos while we waited for our departure time.

If we’d had longer after our exploration, I would have walked back around the corner to one of the eateries right on the water’s edge, such as the TSATI Cocktail Bar.

Museum Hop Around the Old Town

For a small town, there are a surprising number of Museums to peruse in Symi.

Right close to the port, you have both the Archaeological Museum of Symi (€2 entry), and the Symi Maritime Museum (€2 entry), neither of which will take you long to browse. And then up in Chorio, you have the Symi Folklore Museum (free) which is the best place to see the history of the island and its people.

As previously mentioned, I originally chose this tour to Symi partly because of the swimming stop at St Georges Bay. And I wasn’t disappointed.

Backed by dramatic steep mountains, this bay is inaccessible by car and is truly untouched and wild, except for the small Agios Georgios Monastery sitting quietly at one end. The bright turquoise water was clear and cool, and there was plenty of sea life to keep us interested as we sam around in our snorkels.

We only had half an hour to swim, but a cooling dip was needed after a hot few hours touring Symi. If swimming isn’t your thing, you can just enjoy the views from the safety of the boat instead.

Afterwards, we clambered back on board for the hour-long trip back to Rhodes.

Things to Know for Your Day Trip to Symi 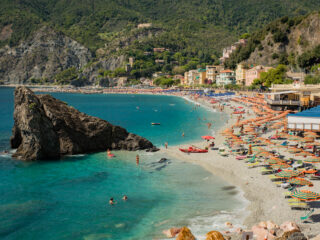 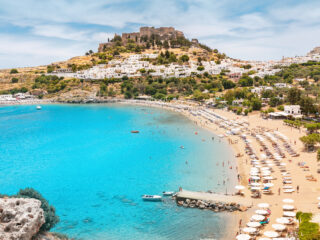