While the rest of the world hails France as being the ultimate foodie destination, vegans are often left bereft at the thought of yet another bare baguette. In a country where eating cheese is almost a religion, meat is seen as an essential element of any meal, and the yoghurt aisle of your local supermarket is so long it could double up as a small town landing strip – being a vegan in France can seem like an uphill battle.

My husband and I made the decision to adopt a plant-based diet around 6 months before we moved to France. But unfortunately, just as veganism was hitting the mainstream in New Zealand, France, on the other hand, still had its head firmly stuck in the sand.

I’d experienced a taste of being a vegetarian in France during previous travels, and it didn’t leave me full of hope. Between being served a plate of plain pasta at a Michelin-starred restaurant, to finding lardons (ham) in my salade végétarienne – I knew I was going to be up for a challenge if I wanted to not just survive, but enjoy living in France as a vegan.

Attitudes to Veganism in France

While the large majority of French are very firmly in the meat and cheese-eating camp, in the 2 and a bit years we’ve been living in France, I’ve seen the sands slowly start to shift.

A nationwide vegan movement has started to gain momentum, but not always with the right consequences.

As with everything the French do, they do it with a healthy dose of passion. But lately, an unhealthy trend has seen animal activists getting a bit heavy-handed with their message in Paris, where butcheries are increasingly vandalised and butchers threatened.

While I see the benefit of peaceful protests and cube of truth demonstrations, I don’t believe violence is an effective way of getting a message – that is ultimately about peace for all – across to the masses. And it adds to the unfair attitude towards vegans that we’re all a bunch of hot-headed fanatics.

But I digress. For the large part, the worst you’ll get if you tell someone in France that you’re a vegan is a blank stare, a look of confusion, or an attitude of indifference. Oftentimes, people are genuinely interested as they can’t fathom how one survives without eating animal products, or indeed, why you’d want to!

Tips on Surviving in France as a Vegan

General attitudes aside, it’s entirely possible to survive France as a vegan – even outside of the big cities! Whether you’re heading to France for a holiday and worried about how you’ll fare, or you’re thinking about making the move more permanent, here are my insider tips for being a vegan in France – and why you needn’t worry!

Eating out as a Vegan in France

The biggest fear many vegans travelling to France have is how they’ll manage when it comes to eating out. And it’s a valid concern. Not only do you have to deal with un-vegan friendly menus, but you somehow have to get your desires for an animal-free meal across in another language.

It’s enough to make many a vegan tremble in their faux-leather boots. But with a few tricks up your sleeve, eating out in France as a vegan doesn’t have to mean side salads and fries!

How to find vegan-friendly eateries in France

Although rare, especially in rural areas, vegan cafes and restaurants do exist in France. They’re becoming more popular in larger cities, and with a little help, it’s not hard to sniff them out. Try these methods for starters:

How to veganify popular French foods

Here are a few french staples that are accidentally vegan, and some that can be made vegan with a few small tweaks.

In time, we’ve learned there are certain types of restaurants that are better to bypass. And likewise, there are those in which we know we’ll find a vegan option or two. The latter normally involves looking past traditional French cuisine, and instead to other global foodie influences.

For all you coffee addicts out there – sorry, but you’re going to have to get used to taking your coffee black! I’m yet to find a ‘regular’ French cafe with any cow milk alternatives on the menu. Like I said above, vegan-friendly cafes do exist, but if you’re outside of the main centres you’ll be out of luck.

I was a bit of a coffee aficionado before moving to France, so as you can guess, the first thing I do when I step foot in another country (sometimes, if I’m lucky, before I even leave the airport!) is order a large almond latte!*

*And as a responsible vegan, I always make sure to have my Keep Cup on hand.

– Eating Vegan on the Road

One thing to be aware of when travelling in France as a vegan is that if you’re driving long distance, you’re going to want to take some vegan eats with you! The service stations on the motorway seem to be slower than average with catering for a range of diets and you’ll be hard-pressed to find anything other than crisps and a packet of Oreos to nibble on.

And most supermarkets are also closed on Sundays, so stock up on Saturday just in case.

Shopping as a Vegan in France

If you’re staying in France for a while, or you’ve booked self-catering holiday accommodation, you’ll be able to take advantage of the amazing farmers’ markets and bio (organic) shops throughout the country.

It’s very much part of the French way of life to visit the farmers’ markets throughout the week to stock up on fresh fruit and veggies. Every village (of a certain size) has a weekly market, and they alternate days so you won’t have to venture far to find a market on any day of the week.

If you’re in a larger town or city, you’ll find they often have daily markets. It’s the best place to buy seasonal produce, as well as other goodies like bakery goods, deli items, and occasionally bulk grains.

French supermarkets don’t generally have a huge range of vegan goods. But they are the cheapest place to buy vegan milk, yoghurts, dark chocolate, hummus (watch out for added milk or cheese!) bulk nuts and grains, and staples like pasta and noodles.

Most supermarkets will have a decent-sized organic section too, and the allergens aisle is often stocked with vegan-friendly finds. While I have found things like tofu and mock meats in the supermarket, the ones I’ve tried leave a lot to be desired! You’re better off heading to your nearest organic shop to find ready-made vegan goods.

The organic movement is huge in France, so you’ll find organic shops (magazin bio) easily. All the stores I’ve tried have had a good selection of tofu and seitan products, plus they’re generally just amazing for nuts, grains, milk, parmesan-free pesto, vegan treats, even raw cakes! Oh – and they’re the only place I’ve found a good sriracha sauce in France!

France has some great online vegan stores. My favourite, The Vegan Shop, sells the most incredible artisan nut-cheeses that taste just like the real deal. Some other online shops include:

This is where I admit that I haven’t made a massive effort to seek out vegan clothing and shoe manufacturers in France. The French website Vegan Pratique has you covered here though, with their thorough list of vegan-friendly clothing and accessories shops.

Bringing your vegan kids to France for a holiday is one thing, but what’s it like living here with little vegans?

Although there’s plenty of evidence to support veganism as a healthy diet for growing kids, French medical practitioners, in general, aren’t open to the idea. You’ll also have a hard time in public schools, where lunches are catered, and always contain meat and/or dairy. The only options for vegan parents with school-aged children is to either pick your kids up and take them home for lunch every day or get a medical certificate to allow your child to take a packed lunch.

Private, or semi-private schools sometimes allow a bit more flexibility. Some, such as the first French school our son attended, don’t cater lunch at all, so every child had to bring their own. And some offer a bit more flexibility around catered menus. Steiner schools routinely offer vegetarian lunches as standard and can often be accommodating to the vegan diet.

Being a vegan in France can present challenges, and often some frustrations, but it’s absolutely doable! I hope this guide has given you some ideas for thinking outside of the box when it comes to visiting France as a vegan.

One thing is for sure, when you do find amazing vegan food in France, you’ll appreciate it all the more! Happy travelling x 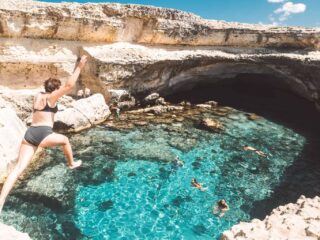 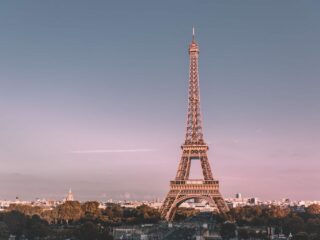 Thank you, so helpful!

This is such a helpful post - thank you! We are planning to spend a month in France next summer, and while I do speak French and am not 100 percent vegan (I do eat eggs) I am completely unable to digest any milk products at all. Good to know that almond milk is available in the hypermarches. Like an earlier commenter, I am happy to know about vegan croissants :-).

Interesting article but if you’re vegan why so many ads for drinking milk?

Hi Alison! Unfortunately, I don't control the ads that are displayed on my site - they are served to represent the readers' interests. So, for example, if you've been looking at handbags online, you'll get served ads for handbags. Same goes for milk. Although I get that it's far from ideal to have ads for milk showing in a vegan article...

Thank you for this article, it is very helpful! I'll be traveling to Cassis, France this fall and am worried about what to eat. Do you know of any good shops or restaurants in the area? Luckily we will be staying in an apartment with a kitchen so I can cook most of my meals at home while I'm there.

Hi Stephanie, while you won't be spoiled for choice in Cassis, you won't starve either ;-) Your best bet is to head to the markets on Wednesday or Friday and stock up on goodies to cook. I'm not aware of an organic shop in Cassis, but there are the usual small supermarket chains. Last time we were there, we just walked into a restaurant on the waterfront and ordered our go-to of a vegetarian pizza without cheese with no trouble. Looking at Happy Cow, there are a few vegan-friendly places around though. Have fun!

This is a fantastic read! I’m vegan too and living in Fréjus in the south, not so far from Provence. Have you seen many changes in the time you’ve been here? I’ve notice bio shops stocking vegan cheeses and even some anti-circus billboards this summer! I actually found your site when you re-pinned my blog post ‘the truth about living abroad’ and my views suddenly spiked! (Thank you!) I am actually in the draft stages of a post similar to this one and would love it if you checked out some of my other posts.