Apart from one fun but random Christmas spent in the Scottish highlands, most of my ‘holiday seasons’ have been spent in sunnier climes. Xmas to Kiwis means heading to the beach, bringing out the BBQ and enjoying long warm days.

But as much as I love summer, Christmas traditions don’t have the same magic when it’s 30 degrees outside! That’s why I’m so excited to experience our first French Xmas this year. And what better place to kick off the season than a traditional French fête in the grounds of a 14th Century Chateau – the Château de Crazannes.

Château de Crazannes is a 12km drive from Saintes, in the Charente-Maritime region of France. The Château has housed a string of high-profile families over the years, but perhaps most notably it was home to Jules Gouffier – the Earl of Caravaz. Otherwise known as the man who inspired the character of Marquis de Carabas in the famous fairytale ‘Puss in Boots‘ (Chat Botté in French).

The Château is now commonly called the Puss in Boots Castle – a role they have fully embraced judging by the feline figurines on display.

We’d passed by the Château de Crazannes a few months before but had only admired it from outside the imposing iron gates. So when I came across a virtual flyer advertising their Xmas fête on the last weekend of November, I couldn’t wait to explore the Château and grounds further.

Wrapped up warm on a crisp, clear Saturday afternoon, we headed off to the Château. After paying our €6 entry fee (kids under 7 were free), we decided to enjoy the impressive Castle grounds first, before the early winter darkness fell.

The Château was even more majestic up close. The gardens decorated with festive sculptures and fairy lights that would later transform the Castle into a suitable stage for a fairytale.

We ducked inside the Château where the grand interior had been wonderfully transformed. Carved wooden fireplaces and tapestry-lined walls took backstage to Xmas trees heavily laden with colourful trinkets.

A toy train puffed merrily along a snowy mountain village, complete with a mini Ferris wheel and carousel. I’m pretty sure it was any 3-year-olds (well ours anyway) idea of a perfect Christmas grotto.

Back outside we wandered past the deep moat and perfectly manicured lawn. Stopping briefly for a glass of Vin Chaud (mulled wine) and a tray of frites (not very French, but I can never pass up on hot chips!).

Peeking through a door to the donjon, we found stalls selling handmade gifts and trinkets. We took advantage of the warm room and a comfy bench to admire the most charming and rustic little Christmas display. Then climbed the spiral staircase to find a room fit for a princess – complete with four-poster bed and its own lavishly decorated Christmas tree.

As darkness descended, the Château and outbuildings lit up like a scene from Cinderella. Adults chatted jovially, while children swung from the bell ropes – filling the air with the musical chime of the church bells.

The magic of Christmas had arrived in the Charente-Maritime.

You’ve still got time to enjoy the Christmas lights at the Château throughout December. The Castle is open every day except Mondays and Xmas day, with guided tours at 3pm & 4.30pm.

Those wanting to visit at other times of the year will still enjoy visiting the French castle, outbuildings and the ornate rooms on offer. You can even stay (in right-royal style) overnight at the Château hotel!

For opening hours and bookings see the Château’s website. 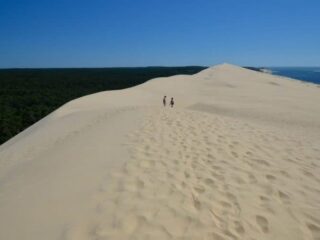 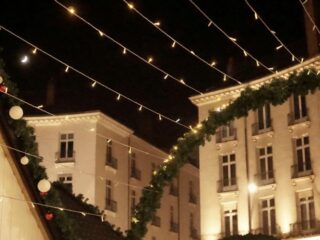 Beautiful! Such pretty decor and even prettier at night. Happy holidays to you! ;-)