Like stepping into a photograph, Les Goudes is one of those places that almost look too good to be true. The small fishing village on the outskirts of Marseille seems a world away from the bustling metropolis. Yet its proximity to France’s second-largest city adds to its appeal with both locals and visitors to the south.

Les Goudes’ privileged position within the Calanques National Park means the village has resisted the overdevelopment that much of the coast suffers from. It remains wholly authentic, like a little moment of time that has been perfectly preserved. A place where you can still find ramshackle beach houses and old men happy to have a yarn about their garden with a stranger.

But that doesn’t equate to the village being sleepy. Come weekends, Les Goudes is brimming with trendy young Marseillais and is clearly a popular place on a warm day.

The End of The World

As you enter the Calanques National Park the city falls away and nature takes over. Craggy inlets are converted into sheltered swimming spots and beach towels are scattered around the rocky cliffs.

There’s nothing here but the sea, the hills, and the sail ships on the horizon. It’s this tranquillity that most likely led to the French expression “va te jeter aux Goudes” (roughly translated as go throw yourself at Goudes / get lost in Goudes) – referring to the feeling of being at the end of the world.

And while this feeling may be misguided, it is, if not the end of the world, the end of the road. Boulevard Alexandre Delabre continues only briefly past Les Goudes, up and over the hill to the petite Port de Callelongue before the hiking trails take over as your only route through the rugged National Park.

It’s a short drive to Les Goudes, but it will take some time if you stop to take in the views at every turn. And I’d really recommend you do take your time, as the views change with every twist of the road.

Once you reach the village, leave your car (details on where to park below), and proceed on foot. You may like to wander up to the hill behind the village, which is pockmarked with bunkers and other remnants of the Second World War. This will allow you a view over Les Goudes, Monkey Bay and the towering Île Maire (Mayor Island).

From the hill, you can continue along the ridge and out across Cap Croisette to the Baie des Singes (Monkey Bay). Apparently, it earned this odd name as it was once a smuggling port, and the local children needed to be as “quiet as monkeys”.

A well-trodden walkway has been etched into the rock and will take you to the bay. Near the end of the path, it splits in two, and you can proceed to the Baie des Singes Restaurant, or carry on over the rocks to the small sandy bay. I’d recommend stopping in at the restaurant – if only briefly – for the views alone.

Food is served throughout the day, but be warned, if you only want a drink you’ll be relegated to the tables in the back. We ordered a citron sorbet, which was pricey but allowed us front row seats with a view over the bay and islands.

To the side of the restaurant is a tiered hill with sun loungers for hire (€15/day). These would make an ideal base for spending an afternoon in this idyllic bay.

If you don’t want to shell out for a lounger, continue around the headland to reach the bay, and enjoy the incredible scenery on offer. This is a better option if you have kids with you too, as the beach is sandy and is wedged between rocks that provide shelter from the wind.

Walking back towards Les Goudes, follow the road and you’ll come across Anse de la Maronaise, a larger (albeit still small) sandy beach tucked in a semi-sheltered cove.

Anse de la Maronaise used to house a large and unsightly nightclub, but in 2010 it was demolished. You would be none-the-wiser apart from the telltale piece of tile or coloured brick being unearthed in the sand.

Despite its newly restored tranquillity, this beach didn’t resonate with me. There was a heavy smell hanging in the air, and perhaps it was the road being so close, or the gritty nature of the surroundings that made us not want to hang around. Perhaps on a different day…

From Anse de la Maronaise, you can continue to follow the road, or take the steeper shortcut over the hill. Choose the latter which will lead you to a bucolic lane lined with colourful beach houses and fragrant pittosporum flowers.

You’ll be rewarded with a beautiful view over the port, and can continue to follow the lane down into the heart of the village where you can quench your thirst at one of the many bars in the bay.

If you haven’t had enough of the sea, there’s another small beach on the right of the bay. Again, it’s not as picturesque as the secluded beaches tucked around the coastline, but is a good place to unwind at the end of the day or to grab a quick pizza or pastis at the neighbouring pub as the sun goes down.

Over the hill, and the last stop on the road from Marseille is la Calanque de Callelongue. The drive, or short walk over the hill, to reach the calanque is certainly worth the effort – for the views alone.

You’ll see the uninhabited Île de Jarron and Île de Jarre that appear to be one and the same but are actually separated by a thin 1m wide channel. And buried beneath the innocent-looking sea, is the wreck of the Grand Saint Antoine – a sailing ship that brought the plague to Marseille before being burned and buried.

These days, the quiet fishing port is home to only a handful of houses, a popular and lively restaurant, and a tiny sand beach. Pop by if you can, but be warned that parking is scarce and the dead-end street means there can be a bit of congestion on busier days.

Find out when to visit Les Goudes, how to get there and what to take with you below.

We visited Les Goudes in an afternoon on a public holiday in May and it was very busy. We couldn’t find a park at any of the three car parks I’ve mentioned but did end up snagging a park on the side of Boulevard Alexandre Delabre without having to wait too long.

It’s inevitable that the warmer months will be busier in this scenic spot, so if you’re visiting then, I’d recommend heading out earlier in the day.

How to get to Les Goudes from Marseille

Driving to Les Goudes will afford you more flexibility with your visit. But if you don’t want to fight for a car park, then getting the bus from Marseille could be a good choice. I say this tentatively, as it does require a few changes along the way…

Alternatively, you may like to take a tour instead. I’ve outlined the three options below.

If you’re visiting on a weekend or holiday, expect a fair amount of traffic. But other than that, driving to Les Goudes is straightforward. You just need to follow the coastal roads the whole way. Starting in the city with Rue des Catalans, and following the main road as far as it goes. It changes names a few times along the way, but if you stay near the coast and follow your nose you won’t get lost. I’ve included parking info for once you get there below…

Bus to Les Goudes (there are other routes, but this is the most scenic)

From the central city, jump on the 83 bus from the Quai de Rive Neuve (almost opposite where the little ferry docks). Get off when the bus starts to go inland, at Parc Borely. Cross the road and jump on the 19 which will take you as far as Madrague de Montredon. From here, you could walk the final 2-3km along the coastal path – a beautiful walk! Or, jump on the 20 for the final leg of your journey.

Book a tour to Les Goudes

If driving isn’t an option, and you don’t want to fluff around on buses, you could book a tour instead to discover the area. Here are a couple of options that go to Les Goudes from Marseille.

An electronic bike ride from Marseille to the Calanques.

A catamaran cruise to Les Goudes.

There is very limited parking in and around Les Goudes. But there are three main areas where you can try your luck.

All of the above car parks are free. There are a couple of smaller car parks within the village at Les Goudes, but I think it’s nicer to leave these parks to the locals.

Where to eat in Les Goudes

There are several bars and restaurants with seas views where wary beachgoers flock as the sun sets, and the cleverly named Feel Goudes sandwich shop is a popular spot for a low key snack or juice to go. My best advice here is to go where your nose leads you…

What to take with you

I never get tired of discovering new places in Provence, and Les Goudes was an absolute gem of a day trip! Amazing natural scenery, a place where you can still find authenticity and tranquillity, and a fascinating history too… I hope you love it as much as I did! 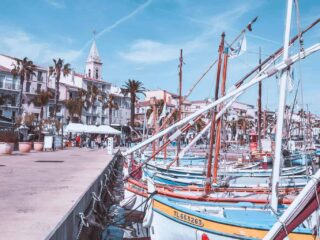 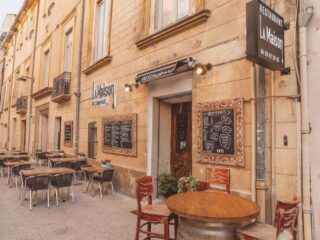 I've been to the Calanques twice and both times it was grey and windy so I didn't get to see the beautiful turquoise water that features in postcards and your photos! Obviously I'll just keep on going back until I strike lucky. I'll definitely make time for Goudes. thanks for linking to #AllAboutFrance

Thanks - one of my favorite areas of Marseille. Next time you are there eat at L'Espai. Incredible spot for a great bowl of bouillabaisse. Thanks for posting - We will be there in three short weeks.