Travel to the Auvergne region of France for stunning vistas, medieval villages, traditional gastronomy, and some of the country’s finest hiking trails.

The Auvergne volcanoes have stood dormant in the heart of France for thousands of years, sleeping giants covered in luscious green vegetation. The rugged drama of this wild region makes for a walker’s paradise. But it’s often unfairly overlooked in favour of other mountainous regions in France.

Read on to find out about some of the best hikes in Auvergne, France.

Stepping Back in Time: The Puy de Dome

Almost 2000 years ago, a Roman temple dedicated to the god Mercury was constructed atop a volcanic mountain in the centre of the present-day Auvergne region of France. Roman travellers from far and wide flocked to this important site of pilgrimage, ascended the cone-shaped mountain, and pleaded with Mercury, the god of travel, for a safe journey.

As they looked out from the temple, they gazed upon a region littered with green volcanic peaks and craters, an otherworldly landscape brimming with memories of a lost, prehistoric age.

This mountain, known today as the Puy de Dome, still attracts a steady stream of pilgrims, using the very same road that serviced Roman travellers all those centuries ago.

I ascended the Auvergne’s most iconic peak via the ancient Chemin des Muletiers (path of the muleteers), accompanied by a wide range of fellow visitors: meandering families enjoying a leisurely day out in the sunshine, seasoned hikers attacking the slopes with vigour, and thrill-seeking mountain bikers taking on the vertiginous, narrow paths.

Less energetic pilgrims opted to take the train: freshly installed in 2012, this state-of-the-art cog railway allows visitors of all ages to summit the 1465 metre-high peak.

Regardless, whichever method of travel gets you there, the reward at the top of the Puy de Dome is the same: a spectacular panoramic view of the Auvergne volcanoes. Stretching in an unbroken line 30km long,

La Chaîne des Puys consists of approximately 80 small, perfectly formed volcanoes, covered in rich forests and home to an abundance of flora and fauna. The Puy de Dome sits at the centre of this dazzling natural display and has been adopted as the iconic symbol of the Auvergne region.

The short, steep hike to the summit offers rich rewards and is a must on all Auvergne travel itineraries. Find more information about the Puy de Dome hike here.

The Spa Town of Mont Dore

I had come to the Auvergne seeking fresh air and long walks, and I certainly wasn’t disappointed. This lesser known-region in the centre of France is home to a vast national park, with mountains that allow for winter skiing and summer walking.

Perhaps the most convenient base for Auvergne hiking is the resort of Mont Dore, a charming, vibrant spa town nestled in the shadow of the region’s highest peak: the Puy de Sancy, towering above the other Auvergne volcanoes at a height of 1886 metres.

From Mont Dore multiple trails lead walkers through the Massif de Sancy, and it’s possible to spend several days here, heading out for hikes in a different direction each day. Find more information about walking in Mont Dore here.

In spring the valleys of the Auvergne volcanoes are covered in wildflowers, fortified by nutrient-rich volcanic soils. In search of these rich floral delights, I decided to explore the valleys and ridges around the town, where I had been told I would find the mountains in bloom.

Heading out of Mont Dore on the path to the Grand Cascade, the trail rises sharply through a thick forest and the first part of the hike is hard on the legs. However, just when energy levels may be flagging, the path opens out on to rolling moorland covered in flowers and colourful moss and heathers.

The sudden change in vegetation, the cool mountain air, and the expansive moorland makes it easy to feel transported to the Scottish highlands, although the shepherd herding his goats and Salers cattle across the mountain is a swift reminder that this is indeed still France.

Continuing along the path, after a short descent and another steep ascent, we arrive at the Grand Cascade de Mont Dore. This waterfall hurtles down the mountain to the town below, and a specially constructed viewing platform allows walkers to thoroughly enjoy the spectacle.

For the best views of the Massif de Sancy, however, it’s best to continue walking up the ridge, which shows off the magnificent vista of Mont Dore and the summit of the Puy de Sancy itself.

The Chaudefour Valley and the Puy de Sancy

Seeking a more challenging hike, I opt the next day for a ten-mile trek taking in both the Chaudefour Valley and the Puy de Sancy. This is a reasonably challenging one-day hike but can be easily shortened by taking the ski lift part of the way to the Puy de Sancy or breaking it up into two separate walks.

Beginning at the Natural Reserve House near Chambon-Sur-Lac the trail passes by a number of waterfalls and picturesque valleys, before tackling more of the region’s characteristic volcanic hills: the Puy de Champgourdeix and the Puy de Perdrix. The path then follows the dramatic Col de la Cabanne before ascending steeply to the Puy de Sancy.

The gruelling climb is more than compensated by the remarkable views from the summit. On a clear day, the Chaîne des Puys stretches out from the Puy de Sancy, snaking through the landscape like the backbone of France.

In the distance, the Puy de Dome is easily identified as a result of its distinctive silhouette, and even further away, it’s possible to see Mont Blanc.

The breath-taking drama of these high ridges is a just reward for a hard morning’s hiking. Having descended from the Puy de Sancy, the path then heads along a ridge to the Pas de l’Ane (the ‘Donkey’s Pass’), and down into the Chaudefour Valley.

This protected natural reserve is truly a wonder of the Auvergne region and offers peace, tranquillity and intimacy after the wide expanse of the peaks and ridges of the Massif de Sancy. The glacial valley is home to a number of significant geological and natural features, including sharply eroded rock formations, and prolific biodiversity.

At the end of the valley, at Saint Anne’s spring, there are ferruginous waters that produce naturally sparkling water. Observant hikers may also spot stoats, deer, or even the occasional peregrine falcon. Find more information about hiking the Puy de Sancy here.

Auvergne hiking doesn’t get better than this. The Chaudefour Valley, particularly after the exhilarating ascent of the Puy de Sancy, is a pure delight, filled with natural wonders.

All that remains is to return to Mont Dore for a hearty meal of Auvergne delicacies, including, of course, the local wine. A hiker’s paradise, the Auvergne region of France is surely the country’s best-kept secret.

30 Things to Know Before Travelling to France
← Read Last Post 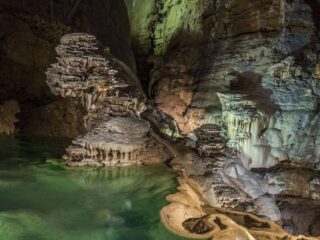 Auvergne is a really beautiful place for hiking ! Especially around the known Puy and volcanoes. There is things to see (more Puy) south to the Sancy, in the Cantal, at the ski resort Le Lioran for example !

Yes, we've spent a few winters visiting the slopes of Le Lioran - love it there! Thanks for your comment, I definitely need to see more of Auvergne.